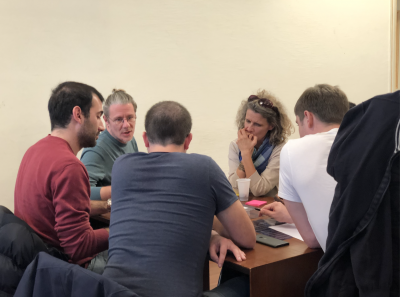 On December 12th, 2019 at the University of Corsica took place a local jam called Artificial Intelligence. 25 people participated in the event: professionals and tech companies, students and university teachers. Students of the sustainable city design lab were invited to animate this business challenge by using a variation of Stranger jobs – a game produced in Brest in September 2019.

Stranger Job draws on the collective intelligence of a group to imagine, question and create unexpected jobs of the future. Participants follow a series of steps which help them to imagine, create, and tell a story that takes place in April 2045. The main goal of the game is to exchange ideas with other participants and develop their creativity. It is a great tool for engaging young people (on a collective reflection around the future of work & jobs). As it invites participants to challenge conventional ways of thinking about jobs, it puts all teams in a prospective and completely creative mindset.

Stranger Job presented at the University of Corsica was based on this main framework of the game, however some elements were changed and reworked to allow participants to identify issues related to artificial intelligence, presented during a conference by Yves Demazaud. 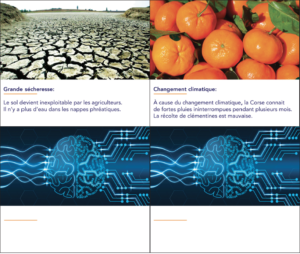 Example of a change made in the game

Session starts with a video produced by Benjamin Garnier and Jules Riché to set the mood of 2035. It is quite prospective and plays the role of an icebreaker.

The idea is, first of all, to work on the transitions, and thereby to question them. This allows participants to freely discuss the conference delivered in the morning. A 20 minute brainstorming session is offered to open the subject. Next step focus on impacts and possible solutions of transitions on professions in different sectors. 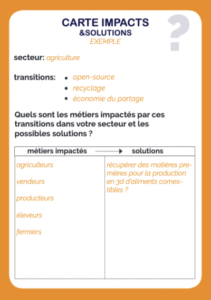 Later, participants describe jobs and skills of those professionals. 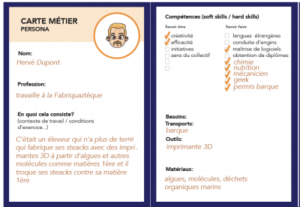 Finally, all those elements are synthesized on a “wall”, including the challenges and issues, the jobs, and also the skills and values of professionals. 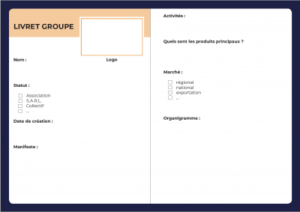 The workshop brought up questions and interesting scenarios for development. Two of those scenarios turned toward an all-powerful AI (humans at the service of AI), three others towards a co-management ( an AI at the service of humans). In these scenarios, two main trends appear. No matter if AI ​​frees up or we put ourselves at the service of AI, there is a risk that this entails.  The game raises awareness of an issue and provokes questions. It is a tool created more to encourage discussions, questions, rather than carrying real progress on the subject. However, the game has made it possible to identify interesting avenues linked to the evolution of the professions.